See what I saw- Bloody Beetroots

So much to write about, so little ability...

I've got an overwhelming amount to talk about, but I'm currently somewhat under the weather due to several over-indulgences- none of which are illegal, and only one of which is a vice.
So, a couple of things. First, I saw the Bloody Beetrrots last night: 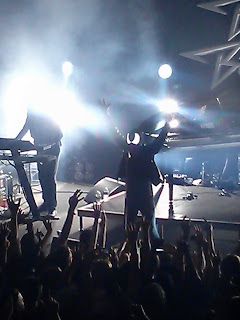 that was pretty awesome. EDM, wrapped around a rocknroll, maybe even Punk rock core.
Do you wanna Dance?

Then, the second thing is nearly totally unrelated- while I've got other CDs to mention, I'm just going over this one: Mark Lanegan and Duke Garwood's Black Pudding. The fathomless darkness of Lanegan's sandpaper and velvet croon set with Garwood's virtuoso guitar is a very heady mix.  It starts as Garwood's game, with a Spanish flavoured fingerstyle workout called "Black Pudding", and a menacing delta country blues called "Pentecostal". But then the dirge of "War Memorial" starts up, and Mark gives off the sweetest vocal he's done in years- all yearning, regret and graphic trauma. Mescalito, the next one keeps up the stalemate, with Lanegan's dirty black howl from the gutter meeting Garwood's delicate modal psychedelic blues halfway between the brothel and the monastery. Sphinx is a rare mis-step, in my humble-ish opinion- burying Mark's vocal with a leslie-effect compression, while Duke's guitar is so close-miked that it's all attack, no sustain, leaving the mosquito drone to dominate.  Soon enough, Driver comes along to rescue the proceedings, sounding like the most skeletal and introspective mid sixties Rolling Stones song you'll ever hear: think Their Satanic Majesties filtered through Nick Drake. The subdued gospel of  Death Ride keeps up the quality. Put it this way: Leonard Cohen is jealous. Likewise John Cale for Thank you. I want this for my ring tone- that would freak people right out. Cold Molly, despite the Casiotone percussion re-imagines early seventies funk as a Nick Cave styled junkyard vaudeville murder ballad. If that doesn't get you interested, I'm sorry, I'll get back to the rocknroll soon enough, but you'll have to indulge me, here. This just totally does it for me, in a non-rock kind of way. The spirit of Nick Cave similarly inhabits Shade of the Sun; it's a watery psychotronic western blues- and would have been an excellent addition to the soundtrack for "The Proposition". What more could a poor boy need than that? Just stellar...